The Teachers4Europe Project is running from University of Piraeus.

University of Piraeus is a public, business-oriented university, founded in 1938 by the Industrialists and Tradesmen Association. Nowadays, it consists of four schools and ten departments. It has 200 Bilateral Erasmus+ Agreements and an ERASMUS+ Charter. It is also a member in several associations such as EUA, IAU, the Community of Mediterranean Universities, the Universities Association of South-eastern Europe, UNIMED, AASB. Since 2017 University of Piraeus runs a Europe Direct at its premises.

This specific project is conducted by the Laboratory of Educational Policy, Research, Development and Inter- University Cooperation (ERDIC) of University of Piraeus.  The aim of this Laboratory is to become a scientific and valid institute to produce basic and applied research in the above mentioned subjects and also cover educational and research needs of the Hellenic and European society.
You can lean more about this laboratory at: https://erdic.unipi.gr/en/

The European Parliament Simulation Action, which is part of Teachers4Europe Project has been taken over by the Hellenic Association of Political Scientists (HAPSc). HAPSc is a Scientific – Nonprofit Civil Society Association. It has a long experience in organizing events like that, as long as several simulation projects have been already organized by it. Also, HAPSc has developed several interantional partnerships such as:

a) member of the United Nations Academic Impact (UNAI)

About Hellenic Association of Political Scientists 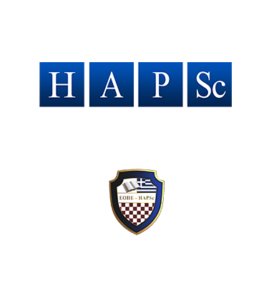